Last Friday, the hubs and I hit up the Time Warner Cable's VIP Blogger Event orchestrated by Kara, and it was such a nice addition to your typical chaotic Plaza Art Fair. As a Presenting Sponsor of the Art Fair, Time Warner had wireless hot spots throughout the Plaza, so people could connect to wifi throughout the entire event weekend.

We first arrived with a prime parking spot because of our VIP parking pass - thanks Time Warner! Seasons 52 catered the event and had some yummy appetizers, desserts and complimentary wine and beer. They also gifted all the bloggers with two wine glasses!

I had a great time meeting new KC bloggers and lounging around on the comfy sofas before it was time to walk miles through the Art Fair. 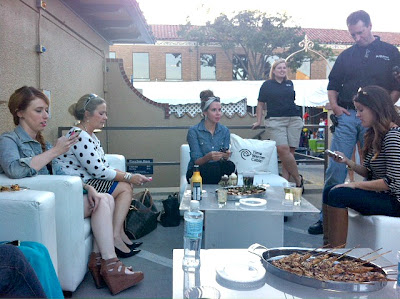 In addition to a swag bag, Time Warner also did a $200 Plaza Art Fair giveaway (didn't win!) and had a tweet and go seek game with tiles hidden throughout the Plaza worth various denominations in Plaza gift cards, which I thought was a great idea.

I thought it was one of the better blogger events I have been to and look forward to Time Warner (hopefully) doing it again next year.


I think this kid had a good time.